Don't take our word for it!

“Nature Baby wholesales and retails a brilliant range of baby products through their own retail stores an established wholesale channel and very successful on-line store. We used to manage our own warehousing and distribution in-house and it was with some trepidation that we decided strategically to outsource these functions to an outsourcing company.

The driver behind this initiative was that we recognised it was not an area of strength for us and we wanted to focus on our core business. SCS was recommended to us by a logistics consultant as being best in class. Apart from three distribution channels we have other complexities around volatile order spikes through on-line promotions and seasonality, we also have complex packaging requirements (e.g. some garments need to be individually gift-wrapped with ribbons and handwritten cards etc…).

Our experience with SCS has been excellent, in partnership with SCS our business continues to grow from strength to strength, we can honestly say they are a critical part of our team and we couldn’t imagine life without them, in the years we have been with them we can attest to their significant IT capability, willingness to consistently go the extra mile and attract and retain excellent staff. Having worked with SCS, we would never consider going back and facing all the hard and hidden costs of running a DC, the SCS solution for us has been cost effective and  helped our business prosper.”

“Launching  The Shopping Channel in Sept 2012 was a complex,  multi-million dollar endeavour, we were very confident in our ability to manage IT, content and TV. However  in establishing the business case, our research showed that execution of a brilliant fulfilment service was a high risk area that we had little expertise in, our research clearly showed that many great on-line ideas/product offerings,  stand or fall at this point.

After assessing the market, were close to making a decision but were still feeling nervous, the name SCS had been recommended arbitrarily a few times from different contacts but we didn’t approach them until the 11th hour, initially  preferring to explore opportunities with the larger multinationals and people who were known to us through our own network. That said, the contrast they offered in comparison to the rest of the market when we did meet with them, was stark . Impressed with their IT capability and specialist e-tailing fulfilment products supported by a can do attitude,  we selected SCS as our supply chain partner.

After going live, the fulfilment part of our business serviced by SCS remains a stand out performer within the business and a material point of difference. SCS led us through a minefield of Freight and Supply Chain related IT issues as well as supplier validation complexities SCS  consistently deliver a flawless execution of our delivery promise that has been critical to our success. In hindsight, we are convinced no one else in the NZ market could have delivered the level of service for the value SCS offer and recommend them to any e-tailer who has a vested interest in best in class service. With the added benefit of the lowest cost of ownership.”

“Fusion Electronics Limited is proudly a NZ success story that has carved out a material share of the  NZ market and is a recognised leader in a number of growing global markets.

We were sold on the concept of outsourcing our fulfilment some years ago and were with a large multinational provider who was a recognised global leader in logistics up until 2009. We have since discovered that there is a difference between multinationals and local specialists.

Our experience with the previous provider was we would have up to 4-5 errors some days. A large portion of the blame for this was placed on the lack of IT integration and a proposal was offered to us create an integration, the costs to us was to be around USD50k and would take up to 3 months. This was the catalyst to us re-looking at the market upon where we discovered SCS.

We were impressed with SCS from the outset, technology savvy, innovative and flexible, we decided to proceed with SCS and two key things stick in my mind:

After 5 years we continue to receive high service levels, in the last  6 months of 2013 we have one recorded error out of thousands of orders and tens of thousands of units, and we have grown to expect this level of service.

Importantly I think, for companies looking at SCS, as an ‘established SCS client’ I can also recommend SCS for very stable pricing. In 5 years our storage has increased just 12 cents per pallet per week, we have had no increase in base labour rates, our courier rates have increased less than 50% compared to the market as SCS continually leverages  its growth, process management and technology  to our advantage.

For customers considering outsourcing historical pricing is generally overlooked, knowing a number of companies that outsource myself it seems to be a common practice even amongst multinationals to lure in 3PL businesses like ours  based on price then ratchet up the pricing once they have you in 6-12 months citing a misunderstanding of “the scope”, SCS and clients I know that use SCS have never been exposed to this tactic but for this reason I would strongly suggest including this test in your due diligence, SCS in my mind stands out in this area also which gives additional peace of mind for the future.

Fusion pride themselves on keeping ahead of the market, our products are innovate and SCS help us maintain this ethos in the fulfilment, this year SCS are implementing an automated email alert to our clients to advise of shipment dispatches (with integrated track and trace), a good example of how SCS continues to innovate and help keep us ahead of the competition.”

Trust me there is no comparison. 2 years ago I spent half my day fixing warehouse mistakes. As of today I haven’t heard of a mistake for months!! Time is money.

I have done the rounds and you won’t find a facility with better people, technology, service and systems THAT WORK!”

Innova Pharmaceuticals
“Valeant is a billion dollar global pharmaceutical multinational. We have been working with SCS for over 3 years and we have been delighted with the services they offer. Up until 2012 Valeant engaged with SCS to support our procurement, fulfilment (warehousing and distribution), customer services and debtors management requirements and supply an accounting system solution that interfaced with our ERP in Australia (Navision, at the time).

Over this period they delivered an excellent standard of service and regulatory compliance. In fact we moved to SCS from another 3PL provider who went into receivership in 2009, SCS picked up our account and in less than a week had it running almost perfectly, with regards to their fulfilment capability, our first external audit revealed one stock error, this was light years ahead of what we had come to expect from our previous provider and proved to be a new level of standard across a number of metrics that we have enjoyed ever since. Another example is that in a debtors management capacity SCS significantly pulled back our debtors ledger from being poorly run for a number of years to mostly current within 6 months.

In 2012 Valeant made a strategic decision to change the model in NZ and appoint an agent, this meant working with our logistics provider and an appointed sales and marketing partner to facilitate a step change in the business. Part of this change included migrating to a new ERP solution in NZ and creating interfaces and reports to feed into our new ERP in AU (and globally) SAP. We used the change as an opportunity to challenge the logistics model in the NZ market, through this process SCS proved to be competitively priced and offered advanced capability so won the new contract. As part of this new contract SCS implemented EXO as the ERP for us in NZ and have taken on more senior level book-keeping responsibilities to allow us to confirm to the stringent SOX (Sarbanes-Oxley) reporting requirements that we operate under being a US based company.

SCS also provide the ERP for our NZ partner and have developed CRM and Payroll capability for them.

We are happy to recommend SCS as an efficient, high performance logistics company with excellent compliance capability supported by world class IT skills.” 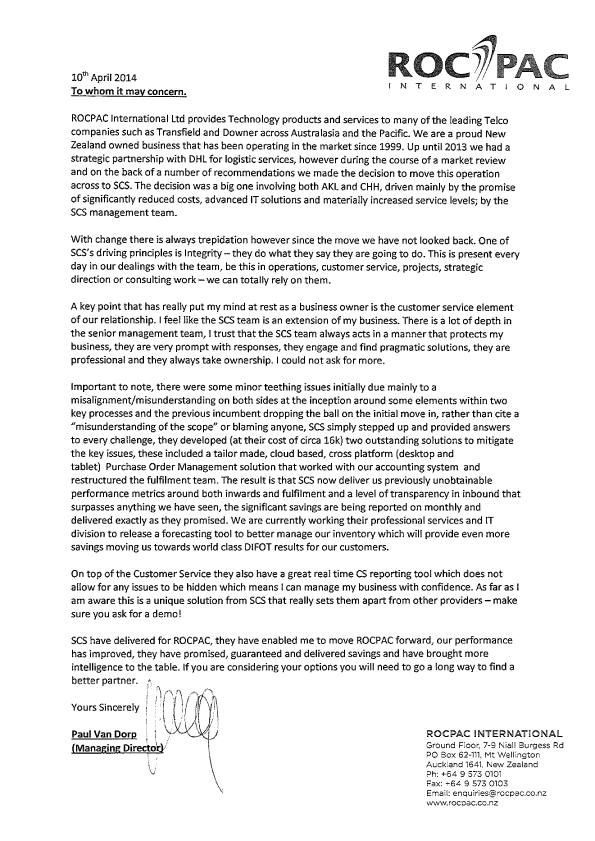 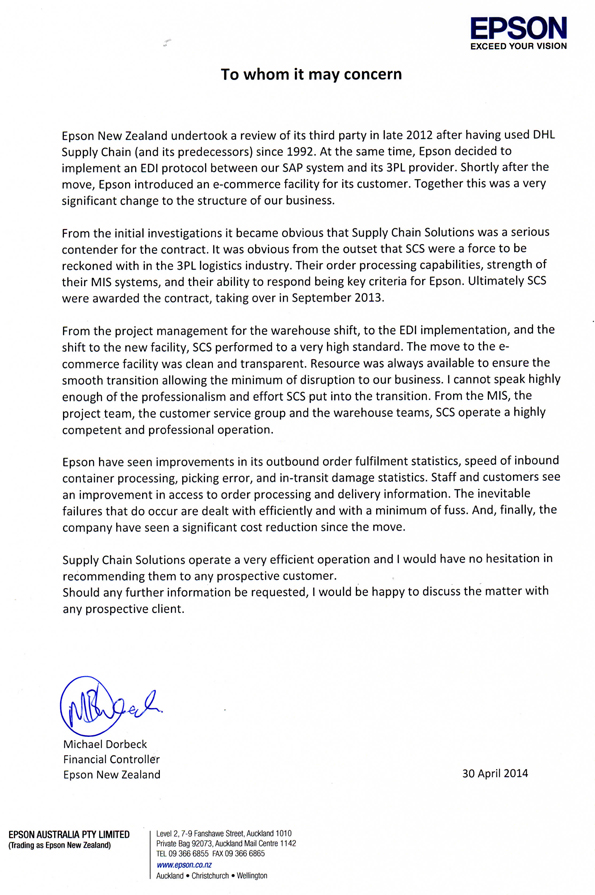 Better yet … book in for a FREE tour and see how we operate. You won’t be disappointed!

Apply for a Workshop

We charge $7,000 to cover our expenses for this exercise.
We’re so confident in our ability to deliver value, our workshops are covered by out subjective guarantee.

A little bit of good news